WYBN & PEACE MISSION Group was hosted by HE Tomaso Caputo, Archbishop Prelat of Pompei and Pontificat Delegate. Working meeting was held in Piazza B. Longo, Pompei on 19 September 2013. Collaboration platform between World Youth Bank Network and Vatican authorities has been confirmed on the ground of common interests in worldwide deployment of humanitarian and supporting activities on solving of burning human conditions as Youth Employment, Refugees, Immigrants, Homeless and Deprived, socially excluded and non-bankables, etc. Common recognition and support to the Peace Mission expressed by both Vatican authorities and WYBN/United Nations Global Compact. 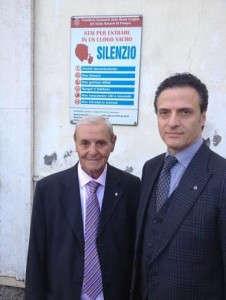 HE Shamis-Mezrahi, WYB Board President and Head of Peace Mission with Dr. Fiorentino

HE Shamis-Mezrahi Board President of the World Youth Bank and Head of Peace Mission Project mandated for preparation of perspective visit of His Holiness Pope Francis to The Gulf Region, with the authorities of United Arab Emirates and related countries as well as for empowerment of Inter-religious dialogue based upon mutual recognition, tolerance and broader understanding amongst different religions in Gulf Region and worldwide.

To participate in our sponsorship program please feel free to contact us to discuss how you can help our mission to bring world peace in our time.