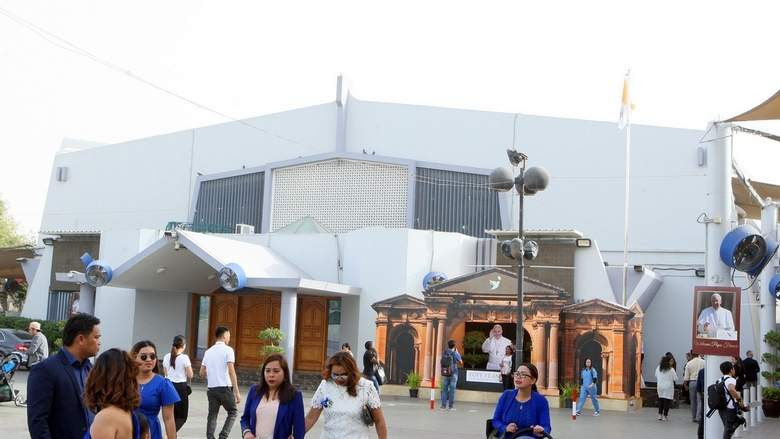 Today marks the one-week countdown to Pope Francis’s visit to the UAE, the first such visit by a pope to the Middle East.

Today marks the one-week countdown to Pope Francis’s visit to the UAE, the first such visit by a pope to the Middle East. Coinciding with the Year of Tolerance, Khaleej Times is launching a series to mark this historic milestone and promote tolerance among residents. In Part 1 of the five-part series, we sit down for a candid chat with Fr Lennie J A Connully, parish priest of St Mary’s Church in Dubai

In 2018, when it was announced that His Highness Sheikh Mohamed bin Zayed Al Nahyan, Crown Prince of Abu Dhabi and Deputy Supreme Commander of the UAE Armed Forces, extended an invitation to Pope Francis to visit the UAE, it marked the beginning of something special.

Not only did it reiterate the country’s efforts towards promoting tolerance, it paved the way for another historic moment in this young country’s existence – the first visit from a Pope to the Middle East.

Now, as the UAE readies itself to host the Papal Mass on February 5, Fr Lennie J A Connully, parish priest of St Mary’s Church in Dubai, said that one invitation has indirectly touched thousands of lives here in the UAE.

“The respect the UAE leaders render to Pope Francis is a respect they render to the Catholic Church as a whole, and we are thankful for that,” he told Khaleej Times.

“I want to sincerely thank the UAE government for their openness and respect in welcoming Pope Francis. Inviting him here has given us all an opportunity to worship with him and be close to him.”

Living in the UAE for eight years now, Fr Lennie said he was optimistic that one day the Pope would visit the Middle East. But to have it come to fruition so soon is a testament to the efforts of the country’s leaders in building stronger bridges with different religions around the world.

“I never thought the Pope would visit so early. Actually, I’m still getting over the shock. I’ve lived in Europe, India, Africa and now the UAE. This country is exceptional and unique. The Rulers always listen to the people. They put out the feelers to get the sentiments of the people here. They know that these people, expatriates, are contributing towards the welfare of the country and they know the importance of tolerance in creating this beautiful atmosphere we live in,” he said.

Speaking about the importance of the Papal visit, Fr Lennie said that with Pope Francis being the head of the Catholic Church whose followers mark a majority of the world’s population, his presence here sends out a big message.

“Pope Francis is an international figure of peace and tolerance so he has a lot to contribute to that ongoing dialogue. Since his time as Pope, he has been a pioneer of tolerance, even taking the name ‘Francis’ from Francis of Assisi, a saint who detached himself from vanity, luxury and pride. He has a great impact on people, not just Catholics.”

Fr Lennie said that since the “whole world has become a village”, respect must prevail amid the diversity.

“We no longer have to be strangers. We need to respect each other and only then will peace and tolerance follow. It’s important to move out and meet people from other religions because, actually, there is a lot of commonalities among different religions. And that is the beauty of the UAE where so many nationalities are practicing their faith peacefully. It’s a unique but beautiful situation.”

He added that the Pope’s visit to the UAE will spark a lot of dialogues across different religions and that is “something we will all learn from”.

“Every religion teaches love and tolerance, so now we need to promote what is common to us.”

In the run-up to and during the historic event, Fr Lennie said his congregation will pray for the success of the Papal visit. It will also hold special events promoting the life of Pope Francis so people can get to know him better.

To participate in our sponsorship program please feel free to contact us to discuss how you can help our mission to bring world peace in our time.